Lost in 2012 … we want to capture some images about the Hot Springs in South Moresby now Gwaii Haanaas Park Reserve … special thanks to Mavis Mark for her ability to capture these Island events in pictures. We can always add more pages for more your images!

In October 2012 a 7.7 earthquake shook the islands mightily, the second largest recorded earthquake in Canada, the largest being 8.2 also off our coast. This time something different happened, while no one was hurt and little damage was done … it was very scary! A few days after the quake someone stopped in at Hot Spring Island and found that the “springs and pools” had gone dry! Experts arrived, checked what they could, but were unable to say if or when it would return. It is thought that there was no disruption in 1949 at the earlier major quake.

So we dug up some photos taken a few years ago to show some activity … this was a trip for the Skidegate Elders to the Hot Springs. Rumour has it that this trip was financed by the successful case of Lillian Brown of Skidegate vs BC Hydro [she had being paying taxes on her hydro bill and reimbursed]. 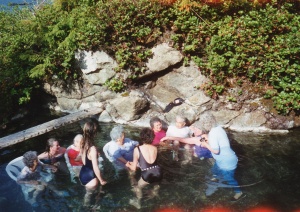